Neumann Terror is a strategic browser game about conquering the universe. Heavily inspired by the beautiful real-time stategy game Eufloria, Neumann Terror is minimalistic and turn-based. The game does not support small screens or touch controls and uses the mouse heavily.

Since this is the first real game I ever made, it comes with a ton of bagage. The code is messy and the game itself has some flaws. The biggest flaw being that despite the game's complexity, it doesn't do much to explain itself. However I encourage players to play around with it. When it clicks, you can find an enjoyable strategy underneath the complexity.

For convenience I will repeat the game's controls here:

This game took very long to develop and I still return to it occasionaly to iron out some bugs, or add new features.

There aren't many graphics in the game, but I did take the time to design a bunch of icons for all the structures and bonuses. 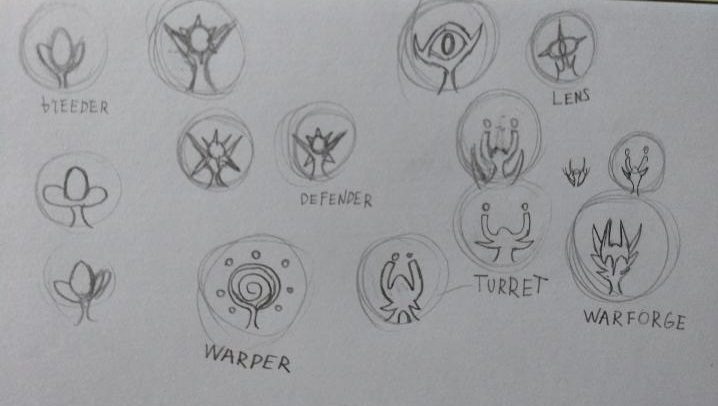 Adding the miracles to the game and inventing new bonuses was really fun too. Not everything made it into the game though

As much as I like this game and liked making it, it also has some damning flaws. Worst of all I think is the lack of a decent tutorial. After I made this game I went on to make another browser game called "Blubmarine". That game arguably isn't that much simpler than this one, but by the mere act of giving the player a list of linear levels that get more complex over time it did a very good job of teaching the player all the mechanics. Neuman Terror lacks this...

I have considered also making a linear campaigne for Neumann Terror, as a way to tell a little story and more imporantly: Teach the player how the game works. It's because of that idea that the game is called Neumann Terror by the way. "The Neumann Terror" would be the name of the big enemy you fight against in each level. Making such a campaigne is tricky however and frankly I never started working on it. On the one hand it's much harder to make a campaigne for Neumann Swarm because it doesn't come with a handy level editor like Blubmarine did. On the other hand adding anything to this game has become difficult because of this game's second big flaw...

The second big flaw is that the code of this game is an ungodly mess. Seriously it's unmanageable and it's all my fault. Curse you past Roel! You doomed us all! I learned about writing clean, scalable and readable code the hard way, and this is how. This is the project that finally pushed me to experiment with Gulp and Typescript in hopes of developing games that I could hope to leave alone for a year and then continue working on it again without the code being all Mad Max. Good thing I learned that, bad thing I only learned it after the development of this game. If I ever make another big change to this game, it will have to be some major refactoring rather than adding a new feature. And that's just not something fun to do in your free time.